The beautiful moment all drink in perfect unison

STORY behind the magic moment.

We saw the lions the previous evening late on 15 Aug 2017 on the banks of the Sabie River, about 4km from Lower Sabie towards Skukuza Camp in the Kruger National Park just lying on the sand in the river and they did not look like they wanted to go anywhere soon.

So we decided to call it a day and return to camp. The next morning we rushed to get to the spot where we last saw them and there was no sign of the lions I was quite disappointed and so was our guests on the vehicle.

Then we decided to go up the river and start our day looking for Leopard about a half an hour later we returned towards the Lower Sabie camp and suddenly out of nowhere we saw the lions appearing on the "beach" out of the reeds and I saw 1 female heading towards the water immediately I had a thought that they might drink but did not for one moment think that this signing might turn out that it did.

And then the magic happened one by one these lions came down to the water and filled in the gaps next to each other as they came in I counted them and 19 appeared then at the last moment before the first lioness raised her head the last baby to make the count a full 20 appeared and started to drink.

WOW, what an amazing moment on safari one to remember in 18 years I have not seen that ever a whole pride drinking like this in full frontal view was unbelievable. Our guest and we left the sighting in awe and was speechless back to the camp. This will become a pride to be reckoned with in the Lower Sabie area of Kruger National Park, South Africa they also have 5 large males that is the dominant coalition so a sound and solid foundation is laid for all these clubs to secure their survival I will be following them for sure. 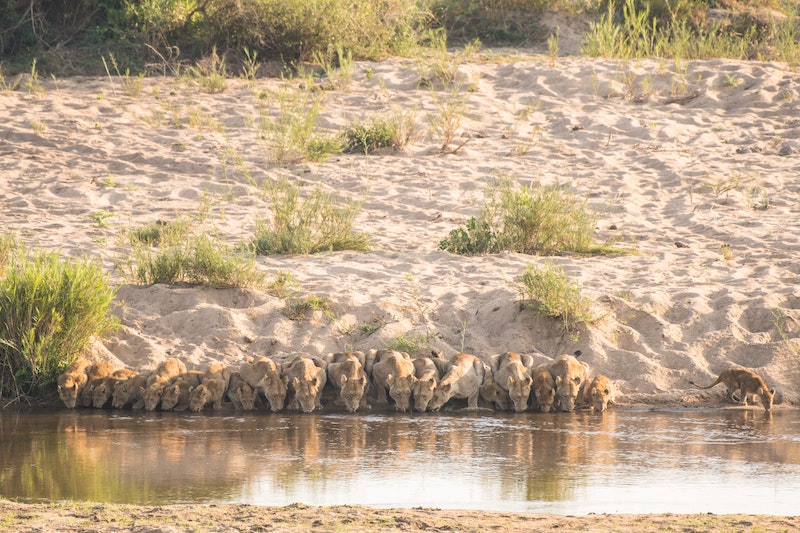